Just like environmentally protected areas on land, our ocean has special designated areas, too.

We work closely with relevant government departments to ensure conservation objectives and legal requirements are met.

No oil and gas activity has been permitted in the Georges Bank Prohibition Areas since 1988.

In 2008, we established a prohibition on issuing licences in the Donkin Coal Block Area.

No oil and gas drilling can take place within one nautical mile of the low water mark of the Sable Island National Park Reserve. 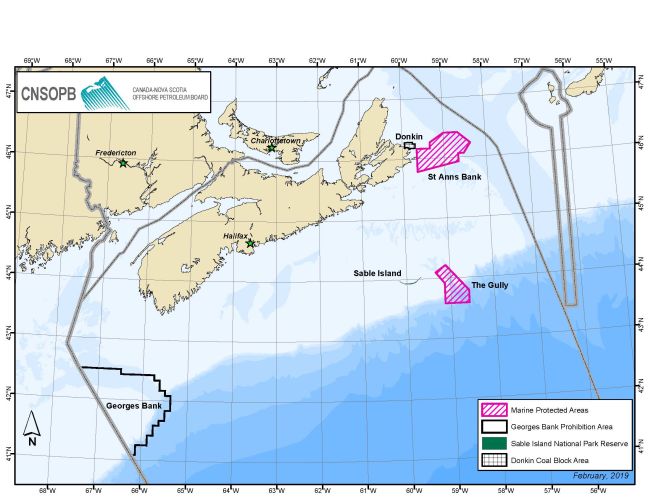 Certain areas in the Canada-Nova Scotia offshore area require enhanced environmental mitigation measures before any oil and gas activity can occur. There are several different types of protected area designations.

Special designated areas are determined by both the federal and provincial governments. When government is looking to designate a special area, such as a marine refuge or park to meet conservation objectives, a number of factors are involved when making their decisions. Part of their decision is determining what type of activity can take place, and the necessary mitigation measures, including exclusions from some areas. As stewards of the Canada-Nova Scotia offshore area, we are committed to meeting government conservation objectives and legal requirements when we authorize oil and gas activities in the offshore.
Project–specific enhanced mitigation measures may also be required to avoid and mitigate effects to aquatic species at risk from oil and gas activities. These enhanced mitigation requirements are determined during the project-specific Environmental Assessment process and subsequent regulatory review processes.

Learn more about some of the special designated areas in the Canada-Nova Scotia offshore.

A Marine Protected Area is established by Fisheries and Oceans Canada under the Oceans Act and provides protection to a defined area with specific legal requirements, conservation objectives and ecological sensitivities.

We work closely with Fisheries and Oceans Canada to ensure that operators follow the rules in these areas as set out in legislation. In April 2019, the Government of Canada released its response to the National Advisory Panel's Final Report on Marine Protected Area Standards. This addresses oil and gas activities in new and existing Marine Protected Areas.

The Sable Gully is located, east of Sable Island National Park Reserve, on the edge of the Scotian Shelf.

In May of 2004, the federal Minister of Fisheries and Oceans announced the designation of The Gully as a Marine Protected Area under the Oceans Act. The Marine Protected Area contains 3 management zones, each providing varying levels of protection based on conservation objectives and ecological sensitivities.

We have not allowed petroleum activities in the Gully area since 1998, when the Gully was first identified as a special area.

St. Anns Bank is located east of Cape Breton, Nova Scotia and includes most of St. Anns Bank, Scatarie Bank and a portion of the Laurentian Slope and Channel. On June 8, 2017, the St. Anns Bank became a Marine Protected Area under the Oceans Act.

There are currently Regulations in place for the St. Anns Bank Marine Protected Area, which includes four management zones, with varying levels of protection based on conservation objectives and ecological sensitivities. Oil and Gas activities are not identified as an activity that can be permissible within any part of the Marine Protected Area.

Other Special AreasThe Canada-Nova Scotia offshore area has sections where oil and gas activity may be limited or not allowed. Learn more.

Under the Fisheries Act, there are select management measures that help protect important species and their habitats, including unique and significant aggregations of corals and sponges. Termed, Marine Refuges, these measures are intended to be in place for the long-term, so they will make a lasting contribution to marine conservation. Within the offshore accord area the following areas have been identified as Marine Refuges:

Oil and gas activities within these areas will be assessed on a case-by-case basis as part of the Environmental Assessment and subsequent regulatory review processes.

A brief description of each permitted activity is provided below:

The Georges Bank Prohibition Area is located off the coast of southwest Nova Scotia, along the Canada-United States maritime boundary. In 1988, a moratorium was placed on all offshore oil and gas activities. This means that no exploration, drilling, or development of oil and gas can be completed by operators in the defined area. This includes the transportation of oil and gas produced in the area.

The moratorium was authorized by the Governments of Canada and Nova Scotia. Over time, the governments continued to extend the moratorium. In 2015, a joint ministerial notice issued by the federal Minister of Natural Resources and the provincial Minister of Energy and Mines, led to the creation of the Georges Bank Protection Act. This amended the Accord Acts to extend the moratorium until December 31, 2022, where governments will assess further requirements and restrictions.

This means that no oil and gas activity is currently permitted in the Georges Bank Prohibition Area.

The Donkin Coal Block Area is located off the coast of Cape Breton, Nova Scotia. In 2008, we issued an order prohibiting the issuance of licences, meaning no licences can be issued by us for offshore oil and gas rights in the defined area.

As a result of the prohibition order, the Government of Canada created the Donkin Coal Block Development Opportunity Act and the Government of Nova Scotia updated the Undersea Coal Mines Regulation Act that amends the provincial Accord Act.

This means that no offshore oil and gas activity is currently permitted in the Donkin Coal Block Area.

There are several areas offshore Nova Scotia that are identified and protected critical habitat for aquatic species at risk. These include Zone 1 of the Gully Marine Protected Area, Shortland and Haldimand Canyons for the Northern Bottlenose Whale, Scotian Shelf population, and Roseway and Grand Manan Basins for the North Atlantic Right Whale.

When it comes to reviewing an application from an operator to conduct any offshore oil and gas activity, we work with other relevant government agencies to ensure that risks to the environment are properly assessed and that they will be appropriately mitigated.