The Environmental Assessment has not been submitted. The Project Description and/or Scoping Document provide the following information for Multiklient Invest’s potential multi-year seismic program for an undefined period between 2020 and 2028. Specific data acquisition plans for 2D and 3D surveys are not yet determined and will depend on industry demand. 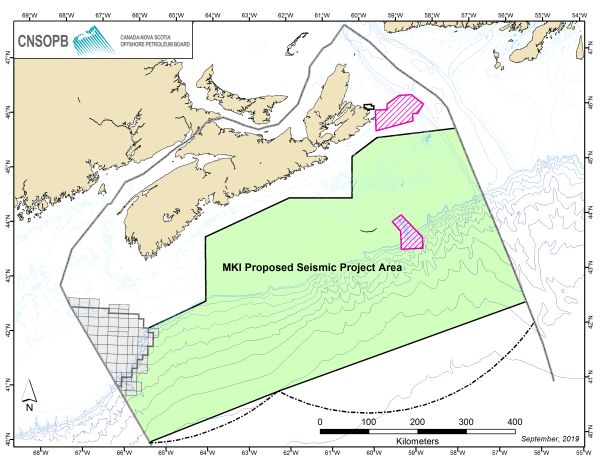 The proposed project area covers much of the offshore deep water and slope from the Laurentian Channel to the east, to the Canada-United States jurisdictional border to the west. The proposed project area also includes many of the shelf banks, from Misaine Bank in the east, to LaHave Bank in the west. Bacarro, Browns and Georges Banks are excluded.

Other ocean uses in and around the area include scientific research, military activity and offshore oil and gas exploration activity. Activity and infrastructure associated with the Sable Offshore Energy Project and the Deep Panuke Offshore Gas Development Project currently exist (decommissioning is underway for both) on the Sable Island Bank, and to the south is the BP Canada Energy Group ULC owned Exploration Licence 2434R.

* All links below are Adobe Acrobat.